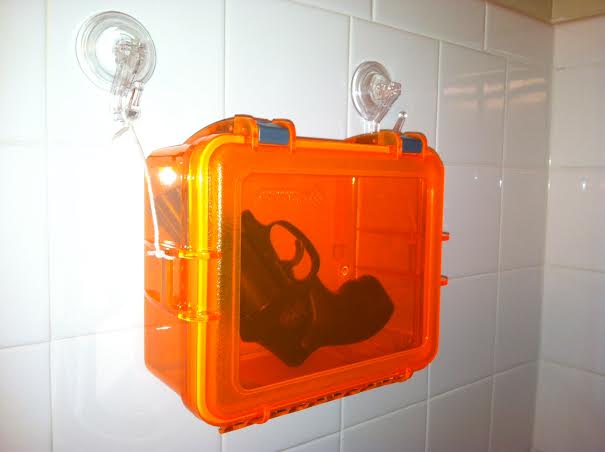 Do it yourself shower gun box for less than $15.00. Never get caught in the shower without what you need to get the job done again!

When are you most vulnerable in your home?  I would submit the answer to that question is simple:  it’s when you are in the shower.  Think about it, even if you carry a gun while in your home it’s probably not with you in the shower.  The shower creates quite a bit of noise when it’s on, thus impairing your situational awareness.  Additionally you are naked, not exactly the best attire to fend off an attacker.  Think I’m being over the top?  Check out these recent headlines.


The suspect reportedly entered the victim’s apartment through an unlocked window, police said.

Lifetime sentence for man who stabbed mom’s boyfriend in the shower.


A Burlington Township man received a life sentence Friday for fatally stabbing his mother’s boyfriend in the shower.

I knew I wanted to keep a gun in my shower but no solutions on the internet really interested me.  Lots of guys put their guns in a zip loc baggie, the concept being that they could shoot the gun while still in the bag.  I desired to create something a bit more permanent which would still allow easy access to the gun.  A few more considerations while planning my project:

I braved the crowds at Walmart to find a box that would suit my needs.  In the outdoor section I was able to pick up a Large Outdoor Watertight Box for less than $10.  I then made my way over to the bathroom section and found a few suction cups for around $2 each.  The Zip Ties were already in my garage and I should mention that I did not end up using them in the finished product.

I then test fitted the box to the back of my shower wall, the idea was to use the zip ties in conjunction with the suction cups.  I quickly realized that was not going to work.

Zip ties discarded, I decided to use some of the double sided strips from command hooks to mount my box to the wall.  I did not use the water resistant strips (didn’t have any at home) but could always swap them out if need be.  Since the box will not be getting wet hopefully it will hold up to the moisture in the air.

The box mounted solidly to the wall (which I made sure to clean beforehand).  As you can see I mounted two of the suction cup hooks up near the top of the box, these would be my safety tie down points.

Safety tie downs are a byproduct of training, where no mount is trusted and thus the object is tied down “just in case.”  In this instance I wouldn’t want a box with a gun in it falling free and coming down on top of my foot.  Here is a picture of the box with a revolver inside.

I have the gun pointed up so it won’t flag anyone in the bathroom, additionally it makes it easy to grab once the box is opened.  I like the idea of a revolver because of the simplistic design, and it’s a breeze to clean.  If you are wondering how easy it is to pop the locks on the top of the box it’s really not that difficult at all, you can access the gun within a few seconds.  Here is the finished product.

I realize there is no way to be 100% prepared 24 hours a day, 7 days a week.  Even with this gun/shower configuration it is still plausible that someone could tip toe their way into my bathroom, pull the curtain back and go Alfred Hitchcock on me.  Yet this does put yet another tool in my preparedness bag and given the stories I posted at the beginning of this DIY, an advantage against a home invader who might attempt to get the drop on me while I’m trying to get Zest fully clean.

iThere are no comments

This site uses Akismet to reduce spam. Learn how your comment data is processed.

Begin typing your search above and press return to search. Press Esc to cancel.